The developers of Appolonia City have completed refurbishment of the classroom building and toilet facilities of the community school located near the new city development in Greater Accra.

The handover of Appolonia Junior High School to the Kpone Katamanso District Educational Directorate (KKDA) coincided with an inter-community festival of sport that promoted health and well-being. The festival saw participation from a range of clubs and individuals from across the Kpone-Katamanso district, as well as Appolonia City staff.

Elders of the community were also present. The officials commended Appolonia City for its work in rehabilitating the school and organising the games.

More than 150 members of the community took part in the games, which included volleyball, lime and spoon, sack races, draughts and more. The highlight of the day was a football gala, held among three keep fit clubs within the community. The Appolonia Keep fit club took home the trophy after a tough match, ending in 1:0. 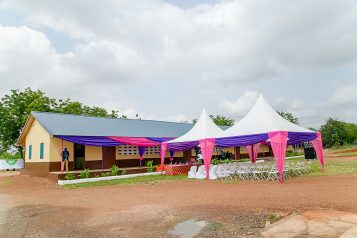 The school is one of a number of major projects undertaken by Appolonia City in the community. In 2014, the company upgraded the Community-Based Health Planning and Services (CHPS)-compound to a National Health Insurance accredited health centre.

Appolonia City, which is being developed by Rendeavour, Africa’s largest urban land developer, has also supported medical screenings, health walks and cleanup events for the community.

“Appolonia City is committed to the development of the local community,” said Bright Owusu-Amofah, CEO of Appolonia City. “The members of the community are both our neighbours and partners.”