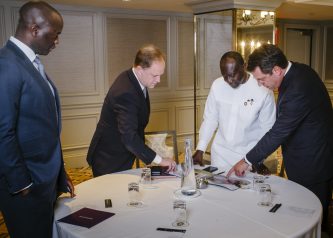 New York, 27 September: President Nana Akufo-Addo is spearheading the government’s efforts to woo foreign investors to Ghana, as evidenced by his leadership of a senior delegation to New York during United Nations General Assembly Week.

Meantime, at a closed-door investor session hosted by the Business Council for International Understanding, Minister of Finance Ken Ofori-Atta met with Appolonia City’s developer Rendeavour, Africa’s largest urban land developer, and other private sector representatives, including FedEx Corp, Kosmos Energy and MasterCard International attended. The theme, according to attendees, was the transformational change that has invigorated Ghana since the start of the year.

According to attendees, Mr. Ofori-Atta promised a focus on transparency by government, with the objective of upholding the position of Ghana as the pillar of stability within the region.

Introducing Ofori-Atta to speak at the forum, Frank Mosier, chairman of Rendeavour, congratulated Ghana on its commitment to strengthen the country and the region.

“Ghana is a country renowned for its stability and growing economic prospects for investors, whether the investors are entering into Africa for the first time or expanding within Africa,” he said.

Rendeavour’s two Ghanaian developments, Appolonia City in Accra and King City in Takoradi, will see aggregate infrastructure investment over the course of the developments of over $1 billion and the creation of many tens of thousands of new jobs.

“Clearly there has been a significant change in emphasis by the Republic of Ghana since January this year. We are happy to count on the support of President Akufo-Addo and his very capable cabinet on our investment journey,” Mosier said. 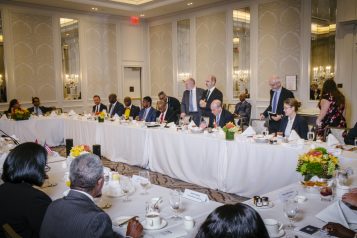 Ghana is one of the first West African countries to recover from the commodities down cycle. Strong growth in the hydrocarbon, mining, infrastructure and retail sectors significantly strengthened Ghana’s real GDP growth to 6.6 percent in the first quarter of 2017.

Ghana Investment Promotion Centre CEO, Kofi Grant, continued the theme of transparency highlighting the wealth of opportunity that is available in Ghana. Extending the hand of friendship to Ghanaian and International investors, Grant reaffirmed the fact that Ghana was seen as a bastion of reliability in the region.